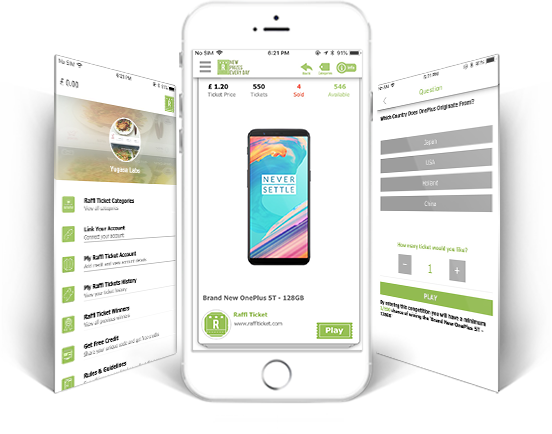 Raffl is a free to download app which gives users an opportunity to win amazing prizes by playing Raffls. App is supported on both Android and iOS platforms. Users can easily purchase Raffles by simply playing a small puzzle. Every Raffle costs just 10 pennies and this amount can be adjusted by Admin in backend. Users have a facility to login through Social Media.Beauty of login feature is that users can join from different social platforms and will still have the same app account under use. App allows to earn credits on sharing the app with friends. Users swap between different Raffles available on the app by toggling the cards. An animation effect for this action ads elegance in the app. Status of the tickets available and sold for a Raffle keeps updating. Users get notification when a new Raffle is added or when any particular Raffle is about to get finished.

Yugasa joined the project during requirement drafting stage. We understood the requirements and did few meetings to clarify our queries. All the designs were done by Yugasa from scratch ad were shared with client timely for approval. App was developed for Android as well as iOS platform using Native Technology stack. Admin section was done in parallel using PHP. During project execution newer ideas were conceived. Some of those were pushed to Phase 2 and many of them were accepted in same phase. Testing team at Yugasa tested both applications and Admin section manually. Yugasa team communicated with third party service providers quite actively.Most of the technical communication between Raffl Team with iTunes and Payment Gateways were backed up and supported by Yugasa team. We later provided an after launch support to the team to make sure that Beta testers of the app can use the product easily.

Journey throughout had been exciting with few hiccups. Communication with third party providers became a challenge for a while. There was a moment when whole development team was under immense pressure just because of denial of service from a third party team. All job was complete and we were unable to launch the app because of lack of this third party issue.Team worked hard and client showed his confidence in us to reach a solution of the problem. Regular support from our client during different phases of project development had been integral.